The Canadian Pony Club website has more information about Rally.

This page contains information specific to the BCLM Rally competition and organizing committee.

Equestrian Canada has set new rules for the use of protective vests in Canada whenever riders are on a cross-country course.

A special memorial jump has been carved in honour of Koa Krakowski Horwitz, a pony club member since 2012, died in 2018 at age 14. The jump was dedicated to her on July 18, the opening day of 2019 BCLM Rally. The sculptural design in based on a koa-wood pendant Koa’s father, Marc Horwitz wears. A 24’ length of cedar log was generously donated by Melanie and Lesli of M&M Connemaras from their horse farm in Langley. 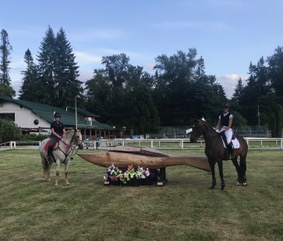 Three similar lengths of log were placed in the XC field at M&M, the home of Glen Valley Pony Club. The ever-strong and resourceful Struys family trailered the multi-ton log to MREC, while Lee from MREC ensured that International jump designer, James Atkinson, was able to complete the carving in time for Rally. Boundary Bay PC members Simrin and Nicole, along with parents Sibli and Yolande, made a fun day of painting and finishing the jump. Much discussion on the 3’ tail section as the perfect pre-training level for schooling took place 🙂 A true koa-wood signature sign created by Koa’s grandparents Charlotte and Ed, will be added to the jump. All along the way, Debbie Anderson and the Parker family championed the construction of the jump, and worked with Koa’s parents, Michelle and Marc, in the most caring and dedicated way possible. 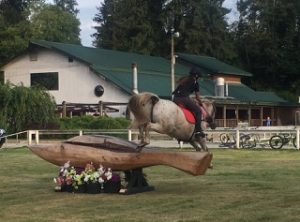 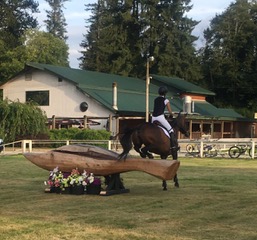 It’s impossible to over-estimate how much Koa loved cross country and Rally. She said outright that it was the best part of Pony Club for her, after her first Rally in 2013. The friends she made at Rally, especially on mixed teams, have proven to be some of the best possible. After Koa’s first round of chemotherapy last summer, she was trying to qualify for Mrs. T with fearless trainer Louise Crooks. Unfortunately, an uninvited, very, very, very large black bear showed up on the MREC field (please ask Lori Drysdale and Laurel Gavin for details). Koa, along with Sophie, was determined to qualify, compete and event level up. And she did. 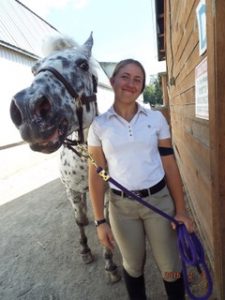 Koa was also extremely lucky to have made the BCLM regional team that competed at National Rally just outside Edmonton last year. We’re still not sure how, but Mackenzie, Stephanie, Amy, and parent chaperones Heidi and Cheryl made the (small) miracle of Koa’s dream of riding at National Rally possible. Every chance Koa had after a blood test, scan, or injection, she tried to find a way to meet up with a horse (thank you so much Kaya Hunter for your scheduling flexibility and never-ending cheer). We are forever grateful to everyone who supported our daughter’s passion for horses and good friends. 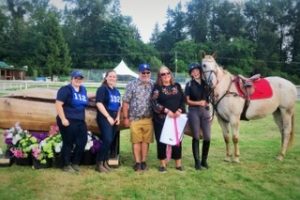 The next BCLM Rally will be held at MREC in July 2019.

Please contact the Rally rep in your branch for registration details and further information.