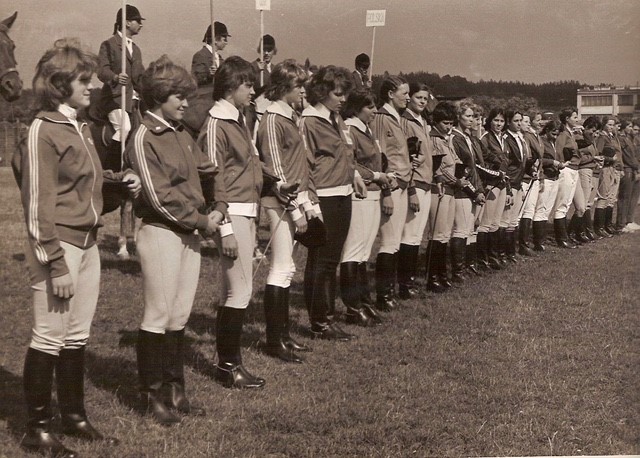 MEMBER OF BRANCH OR BRANCHES: London

Triathlon: Competed at West Point and Montreal in Triathlon 1978-198O with my twin sister Nancy Absolon where the London Modern Pentathlon club was invited to compete.
We competed with the West Point cadets, the US Foxcatcher Team, and other CDN athletes. The West Point meets were held in the Spring and Fall. Our dad would drive the team over Friday to compete that night in swimming, and then the shooting event was the following morning followed by the run in the afternoon. We would then make the long drive back Sunday.
We had the wonderful support of our parents William and Mary Absolon.

Below, Nancy far left and Paula to her right competing in the 1978 Women’s Modern Pentathlon World Cup Championship in Zielona Góra Poland.

There are so many! We loved the pony club! Going on a hunt with the London Hunt Club, we had such a great time! A riding clinic held at Medway farms indoor arena over one Easter weekend and the judge was Dinnie Hall-Holland Fuller Greenway! Competing at the pony club rallies; meeting together to study for the Quiz held in Guelph Ontario.