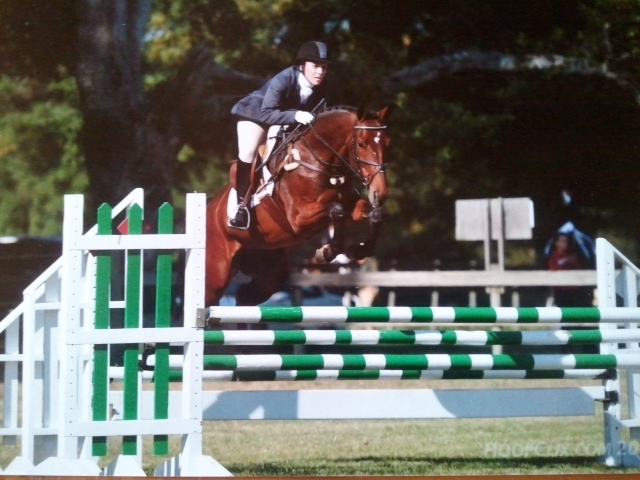 BCIN Working Rally, Dressage, Tetrathlon (I tagged along when my brother was competing!), Quiz, Show jumping

ACHIEVEMENTS IN PONY CLUB AS AN ADULT AND VOLUNTEER:

I volunteered to be the schooling coach at the 2004 Pacific Zones Show Jumping and Dressage Championships held in my region. From 2005 - 2007, I coached most of the members of the Nicola Valley Pony Club. I was also the Technical Delegate for the BCIN Quiz, when it was hosted by the Nicola Valley Pony Club. For several years I was an examiner for our region, until I left Canada in 2008.

Even though I haven't ridden as a named member, my ultimate goal is to ride for Canada. I have dreamed of this since I was very young. I currently ride a lovely mare named Sobe Dazzled (owned by Bernadette Cogdell) who I hope to qualify for the 2015 Pan American Games in Toronto, Ontario. I also have two very nice OTTB's, who will be showing sometime in 2013 at the Novice/Training level, and a couple of other prospects that will be coming to work with me later this year.

I was a member of the Canadian Eventing Team staff, where I was Rebecca Howard's (another CPC 'A' graduate from BCIN) head groom at several competitions. The four most important ones were:

The wonderful horses I cared for were Riddle Master, aka 'Rupert' and Roquefort, aka 'Rocky'. At the Pan Am Games, Canada won the silver medal and Rebecca took 6th place overall in the individual competition. I am very proud that even though I didn't get a medal to place around my neck, I was a very important part of the team. Like the other grooms, I am a respected, trusted member of the Canadian Team.

When you look at the number of riders and grooms who represent their country at international competitions, many of them are past members of Pony Club. A resume with Pony Club experience is often a requirement for the top riders looking for a groom to take care of their mounts.

Being a member of Canadian Pony Club not only gave me my foundation in horsemanship and riding, but it was instrumental in my development as a well-rounded person. I believe in our motto of "Loyalty, Character, Sportsmanship", which I try to follow daily.

Presently, I am the Equestrian Director and Head Trainer at The Fork Stables - a very prestigious and well recognized promoter of eventing. We run a very large event (Preliminary to CIC 2** and CIC 3***) each year in April that hosts riders from all over North America. Some even come from "across the pond" and beyond.

I am also a certified farrier, having graduated from Kwantlen University College in 2007. My stable management and horsemanship was a fundamental part of my success at college, graduating at the top of my class with honours.

I graduated Pony Club with the 'A' level. I am also a certified and recognized EC Level 1 Coach. Please check out my website Dana Cooke.

Memories, too many to list, but here are a few:

Wonderful, wonderful times - I am so glad that I got to be a part of this fabulous organization. I will continue to support and recommend to any parent/child/adult/teenager who wants to learn more about horses that the best place to start is at Pony Club!