What is Prince Philip Games?

Prince Philip Games are a team competition played by Pony Clubs around the world. His Royal Highness, Prince Philip, Duke of Edinborough donated the original Prince Philip Cup to the British Pony Club in the 1950's. Canada has its own Prince Philip Cup, so named by permission of His Highness, and donated by the late J.R.Crang. It is awarded annually to the best team in Canada. 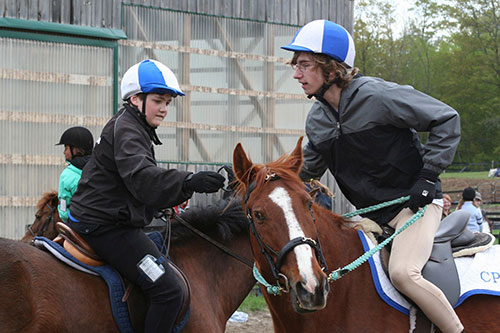 The games were designed for children to compete on well-trained ponies, to use their skill and rapport with their equine and human friends, and to gain confidence while riding in fun competitions. These games help to promote the Pony Club motto, "Character, Loyalty, Sportsmanship".

Teams of four or five riders and their ponies play the Prince Philip Games. With only four participating in each game, this gives ponies, and riders, a chance to catch their breath, by sitting out a race. Riders must be under the age of 15 as of January 1st in each year to be eligible to play "A" Division Prince Philip Games. There is also a "Masters Mounted Games" division for the older members. These riders may use horses. The Canadian Pony Club officially recognized the Masters Division in 1996. Riders interested in learning the Games are taught the necessary skills by the coach and/or by more experienced players in their Branch.

Teams, which qualify at the Regional level, may compete for their Zone Championships. The top teams from each zone compete for the National Championship. Some Regions provide additional levels of competition for less experienced players in a "B" and "C" division. These riders compete at a slower pace, looking for accuracy and technique before speed. 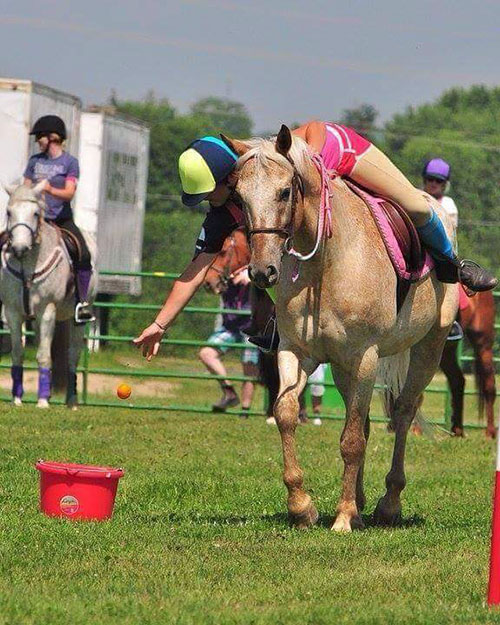 All of the Games are variations on the relay race. Some require the riders and ponies to maneuver a slalom course in and out around a series of upright poles from one end of the playing field to the other where they hand-off a prop to the next rider on the team. Some races require riders to vault off and on their ponies. Others require riders to drop objects such as socks, balls and vegetables into buckets using techniques to prevent bouncing out again! There is an egg-and-spoon race, and others which ask the rider to pick up objects with another object such as in the "Sword" and "Litter" Races. Riders develop remarkable skills in the areas of timing; sense of space, speed and direction; co-ordination; agility and horsemanship. They also laugh a good deal - the only way to deal with mistakes when everyone makes some!

Each year at the Regional Championships, riders in their last year before moving onto the Masters division, can compete for places on the Canadian Prince Philip Games team which plays against teams from Great Britain, the United States, and Australia. Competitions are held on a rotating basis in these countries each year. The Canadian team is composed of riders selected from across Canada. Prince Philip Cup Games are one of the few riding competitions in which the members of the team must interact as a team while riding, perfecting their hand-offs, rotating through the races and sharing the limelight.